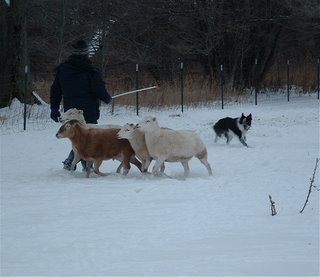 Here is a picture of me doing my newest activity. It's not flyball, but I thought I'd share it anyway.

It's called "sheepherding" and it's what I was made to do. In fact, flyball and agility and games like that were invented to give Border Collies like me something to do in case we didn't have sheep to play with.

I've been having a break from flyball and we're not sure where I'm headed with that. My person started working with me again today and I had a REALLY good time. I also heard her talking to a trainer friend of ours and I heard them say that our trainer friend was going to come to our house to see if she could help my person help me learn to like flyball. We'll see how that goes.

In the meantime, I know that I get to go see the sheep (some people call them the "woolies") almost every week and that's really fun for me right now. I'm pretty good at it, too, but mostly, I just love having fun and seeing my people so happy to see me work.

Oh yeah, there's two other things that happened since I was last posting regularly. First, my people started doing this thing called "fostering" which means that a Border Collie who needs a new home comes and hangs out at our house for a little while--kind of like an in-between place. My person said I should tell you that this is one of the reasons she couldn't keep my blog updated, but she's going to work harder at it now. 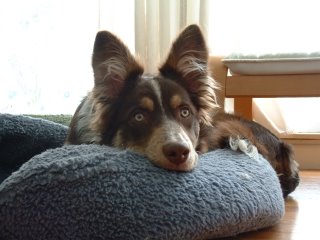 The other thing that happened is that my people brought a new friend to our house. He's actually my little brother (we have the same mom, but he has a different dad) and the people call him "Hamish" which is much more Scottish than Pippin. He's pretty fun and he's learning sheep herding and flyball, too.

My people haven't worked as much with him as they did with me, but he doesn't seem to be any worse for the wear.

He's what's called a "red tri", which means he's tri-colored and the dominant color is a reddish brown (in Australia and New Zealand, this color is called "chocolate"). Like me, he has some speckles on his face and legs, but unlike me, both his ears do the same thing. I'll tell you more about him as I continue to post.