Report from the field (Guest Blog)

From the desk of Lt. Hamish Braeburn Moy 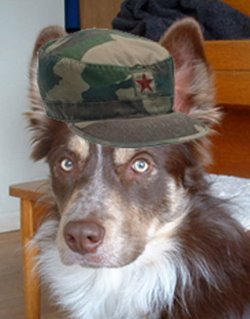 Hamish here reporting on recent events from the field.

Pippin has been directing operations from her crate as she trys to decide if our new kitty, Fox, is potentially a dangerous spy or possibly an enemy combative. 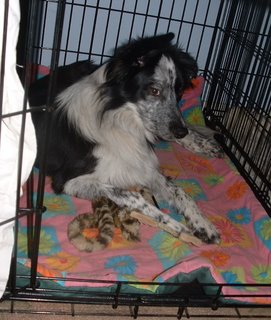 Only a few days ago, Fox hid around the corner in the hallway and leapt out at Pippin as she meandered by. This caused her great alarm, and she immediately took to the crate to insure her own safety while she conducts the important mission of discovering the people's secret.

She only comes out to eat, to do her business and to humor the people with tug playing and butt scritching. (This is an important component in lulling them into believing we are not working to crack their secret, so even though it's perilous, she's a soldier for the cause.) She now has the added task of trying to figure out what Fox's intentions are. She's already a little worried that he's turning some of the troops, particularly the more established regiments, against her. 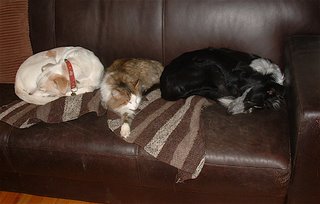 So, she asked me to report on our two important discoveries. While pretending to give kisses, I was able to sneak a glance at the piece of paper with the strange words on it. The people have since removed it, but we saw these words: kyzer (circled) zeki and something that looked like osk--but the people got the paper away before I could decipher it all.

We thought we'd figured it all out when Rafe disappeared for the whole day on Monday and returned in the evening without his testicles. We decided that the secret was really a holiday surprise for Tansy and Pippin and that the strange words were a decoy. Except on Tuesday, the people were still talking about moving furniture and saying things like "only one more week" and "it's kind of exciting."

Then, we thought we had cracked the secret when we saw the people ordering a new range on-line. We figured that they had decided to make sure Pippin couldn't burn the house down anymore. We were not sure how our herding instructor came into the picture, but thought that perhaps she had advised them on a reasonable option for us and our house and again assumed that the strange words were meant to lead us off the real trail.

Alas, we realized last night that we were mistaken and that the secret is still, well, secret. The people were talking about the range right in front of us and we heard them say that they were getting a new one because the old one is broken (that's why Pippin almost burned the house down). Then they said that it was coming on Monday--which is Dec. 4 and we know that the critical date is Dec. 9. Then, they asked Tansy how she was going to do with the changes.

This was quite perplexing to all of us and Tansy could shed no light on what they were talking about--although in her worry and concern, she did bark, bark, bark at Rafe all evening long--thinking that maybe he could tell her what was up.

Of course he couldn't as he is still recovering from losing his testicles and is kind of clueless on the whole secret thing anyway. He's the guy you want to call if you need some brute strength, but he's really not ready for true intelligence missions.

So, friends, we are left still searching for the answer. Whatever it is, it seems like something kind of big.

Pippin said to tell you that she'd post soon. She just has to wait for a point when that scary kitty is in the basement so that she can compose a proper message without having to watch her back.