Yesterday, my people took Hamish and Rafe and were gone all day long. Our pet sitter came to play with us, and my favorite person in the entire universe, our neighbor Moni, came over too. But Tansy, Renzo, the kitties and I still missed our people. In the many hours I had to ponder, I came up with a list of things I'm thankful for and here they are

p.s. Update on efforts to determine the people's secret. We intercepted a phone call between the people and our herding instructor--it was hard to decipher, but we did learn that Dec. 9 is a key date. We have seen a piece of paper that seems to harbor important clues, but we haven't been able to steal it yet. Hamish is doing his best innocent, good boy impersonation to see if he can nab it. The people are talking a lot about crates and food.
Posted by Pippin, the Gentle Pup at 3:22 PM 6 comments:

From the desk of Hamish Braeburn Moy 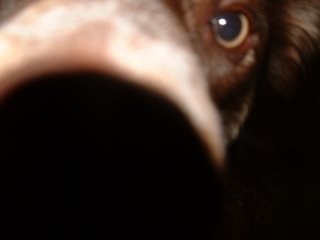 I'm a curious kind of fellow and I wondered what it was that my person had in front of her face. She holds these silver things there sometimes and then there are noises and flashes. The people take some real delight at whatever happens after the flashes and noises.

I was very tired last night after hard work making sure I was successfully entertaining my demanding older sister Pippin and making sure that Rafe didn't steal my things. He's like that, you know. 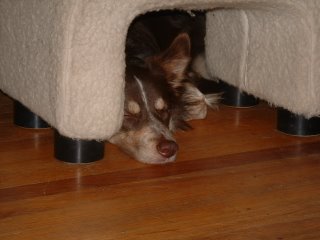 Pippin said in her post that I'm undercover as a good boy. I'm here to tell you that I am in truth a good boy. A very good boy. I bark sometimes and jump up and I don't like to wait my turn in agility class and last week I pee'ed in the tunnel (but only because someone else pee'ed there first), but I am a very good boy. On Saturday I worked very hard with the sheep and it was only by the sheer magnitude of my speed and smarts that the stupid sheep didn't run into the fence and mangle themselves.

Our people have some secret going on. Tonight they were talking about which furniture to move around and they had a list with words on it that they were saying out loud and discussing. The words didn't make any sense to the rest of us. We are trying to get to the bottom of what's going on, but they are really holding their cards close to their chest. However, Pippin has her army mobilized and I'm confident we'll get to the bottom of it soon.

Well, as you can see, that guest blogging thing that the other pups in my pack insisted on has not been a huge success (yet). One post from Rafe, the oaf-puppy (who my people have recently decided is very cute--I'll have to work on changing that--although truth be told, I kind of like him too), and one from my brother, Hamish (who demands to be called H.B. Moy as if he's a "professional")

There is far too much communing between kitties and pups at our house. 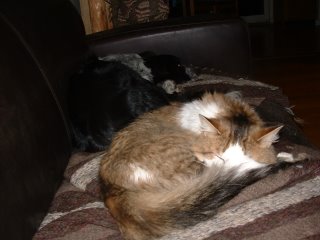 Up there, that's Tansy posterior to posterior with our new kitty, Fox 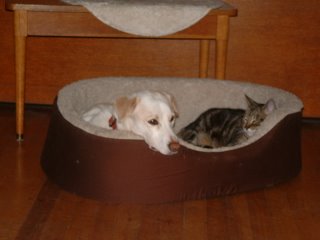 And there's Renzo actually sharing a bed with our fat kitty, Fritz

I think it might be time for some missions for both of them to get their minds back on the tasks involved in being a D.O.G. and not some mealy mouthed cat-lover. 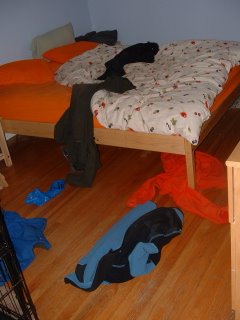 The people remain too stupid to remember to keep tasty things out of their coat pockets and so I am still having to try and remind them through negative reinforcement, which involves clearing out the coat closet of all coats so that they have to put them all back up again. Whenever possible, I also chew a hole in the pockets so that they can really think about their mistakes. When they don't leave treats in their pockets, I give them kisses--positive reinforcement works, too. Of course, if I had opposable thumbs, I'd use a clicker.

As you can see, I brought several coats to our bedroom (but first I rolled around on the people's bed so that it looks a little more lived in and not so Martha. And it also helps reinforce the dominance hierarchy just in case they are confused.) 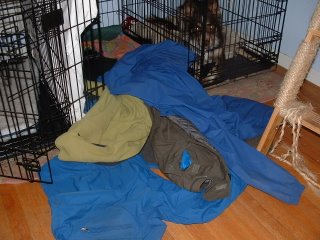 We had herding practice yesterday. H.B. Moy (a.k.a. my goofy little brother Hamish) did really well as usual. He's so good at pretending to be a good boy and a suck-up that I forget sometimes that it was MY plan for him to go undercover like this so that he could be our secret weapon when we need him. At herding he outdid himself and ALL the people watching went on and on about how handsome he is, how good he is on the sheep, what a good team he and MY person are, how he's confident but not pushy, on and on and on. They didn't mention the fact that he melted down like a baby when he was supposed to move the sheep past the instructor and to my person. Something, I might add, I did with aplomb without melting down and crying for my mommy.

Tansy and the oaf-puppy also did very well--though the oaf-let is still slow as molassas and the people can't figure out why.

Today, Hamish and I went to flyball practice. Once I get the ball, I kind of mosey on back--double-stepping on some of the jumps. My person tends to think it's because I'm worried about where my feet are, but another person pointed out that it's probably because I have my ball, so what's the hurry to get back. I am truly coming to fear that my act as an unconfident pup may soon have to end as the people are getting wise....

The people watch way too much football (American-style) on TV and were kind of sad yesterday when the Michigan Wolverines lost to the Ohio State Buckeyes. All I know is that football often means frozen Kongs for us--except when it doesn't and that's when I hit the switch as I described in the Nov. 14 edition of my blog.

Finally, there is some big secret that my people have cooked up. I'm not sure what it is, but will let you know as I discover more.

Lesson for today
Some days are for pondering life's grand absurdities not for learning lessons
Posted by Pippin, the Gentle Pup at 7:27 PM 2 comments: