My scribe is really coming in under the wire today. Hope the Carson's Crazies will still let us play....

Here are this week's questions:

1. How do you teach recalls to your dogs?
I don't teach recalls to my dogs. I prefer them to keep their distance from me. When I want them to come to me, I just run the other way and act like I'm doing something fun. But, really, I don't do that very often. They don't really leave me be enough; however, so I frequently have to correct them for coming to me.

The people taught recalls in different ways. With me and Renzo, they were the most dedicated to actually training it and they played games and hid in the house and hid at the park and called us back and forth between them--that kind of thing. With the rest of them, I guess they just kind of used Renzo and me as the lures. They also showed us that we often get treats when we come. We Border Collies all pretty much come when we're called (we don't always lie down when we're told, though and my goofy little brother Hamish sometimes decides against that'll doing when he's driving sheep somewhere. You can hardly blame the guy, though the people do.)

Renzo remains a hobo at heart though and, while he'll come pretty well when contained, if completely loose, he takes flight.

2. What is your favorite Restaurant or type of food? Clearly I have food on the brain much of the time.

I used to prefer any food that was available on the counter but then a few years ago, I got really turned on to kitty food. We had this old cat, Inji, who ate on the side table and that was great. Since she was old and weak, she was easy to push aside. The counters at our new house are a lot wider, so it's harder to get my treats. Now, my favorite food is sardines, which we get on Wednesday nights.

3. What is your favorite interest outside of dogs/livestock/sports?

Well, I think I've mentioned that I like to play fetch (but only when the other dogs don't come to me and get in my way) and I like to visit with people and give kisses (funny, the visitors don't usually seem to appreciate my gentle, delicate, hardly wet at all style). I don't like any sports really. That's why my people ended up going to sheep. I also like to lay on the couch and rub my face after dinner. 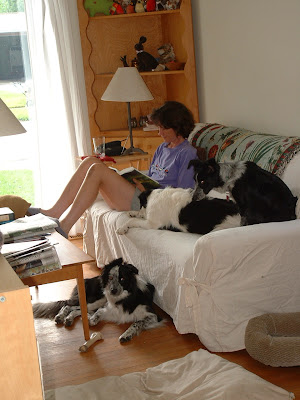 4. Describe your path from where you started out to where you are now! (For example, how did you get from Novice to Open? How long did it take? Train dogs? Buy dogs? I'll take answers for any sort of discipline, or even how did you go from wild dog that didn't listen to well behaved dog - interpret this however you like.) This question was suggested by Pippin (yes, that'd be ME!)

I started training the people in 2004 when they brought me home. I worked hard to teach them to give me cookies and stuff like that. Before all the other dogs came, my scribe taught me lots and lots of tricks. I can whisper and play dead and shake with both left and right. I know how to bring useful objects on command and to turn on the light. I can shut doors. That was fun stuff to learn. My person tried to train me to discriminate among different toys like those Border Collies, Rico and Chaser, but she was not up to the job. Once the other dogs started to come and the people got interested in stockwork, I got new jobs. I'm the second in command (or third if you count the people as two instead of as a unit--but we don't usually do that) and I take that pretty seriously.

The people started learning to do stock stuff in spring 2006, but they didn't really have the dogs for being serious with it and they wanted to be more serious. Hamish was pretty good, but he was only one dog and they needed at least two. Tansy was fun, but had some baggage. So, in summer 2006, they added Rafe as a 7 mos old and then in December of that same year, they got Kyzer as a puppy. So, there they were with three young, green dogs to work (plus Tansy) and green as grass themselves. I shook my head....but they got good advice from their training friends and slowly learned.

My brother Hamish went to his first trial in 2007. (N.B. If I were that kind of braggart, I might add that I came in first in the second Novice/Novice trial at the Bluegrass in 2008. Just in case you're wondering about me. H.B. Moy.) My scribe sent Kyzer to see a man about a bridge in Alberta all winter in 2009. They all moved into Pro-Novice in 2010 and are now at Ranch, but they haven't been trialling much lately. Spending more time and effort on learning. My scribe is thinking that she is going to move into Open with Kyzer next year. Kyzer claims he's ready to go now, but she's holding him back.

5. Is there a dog that you raised that, if you knew then what you know now, you would have raised them differently? Question posed by Jodi.

My people would have handled things differently with Rafe and Hamish. See, they are silly and don't get along at all, so one or the other of them has to be in the crate all the time. The people would have done more to intervene in their interactions if they'd understood where things were headed. No telling if that would have made a difference. They would have also done more to socialize Kyzer and build his confidence around people and other dogs, especially other dogs. Then he might not bark at those dangerous dogs in the mirror so much. We all find that annoying.