Things moving back to normal

Although it's been a pretty sad couple of weeks without our good friend Macchio, the love kitty, around, I think that things are slowly shifting back to a state of normal. My people haven't been quite so sad and they've been playing a lot with us and the other kitties--even the naughty Fritz.

Yesterday one of the people came home from work early--the other is working at home these days and is mostly sitting in the big red chair in the living room with a computer on a lap desk. For hours at a time. Sometimes I worry that she might be dead, but then I see those weird toes the humans have tap-tap-tapping away at this rectangle with little boxes on it, so I know she's still alive.

Normally, coming home early from work means a big, cool walk for us in one of the parks you have to drive to. I got pretty excited at the prospect. But no. The people whisked themselves away and were gone for a long time. A very long time. Longer than is really quite conscionable on a Friday evening. It was at least 2 hours.

And look who they came home with. 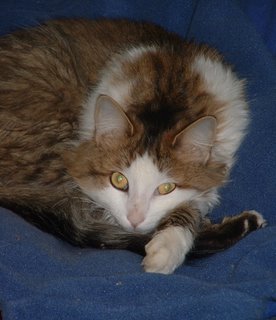 They haven't named him yet (his name at the shelter was "Billy") and they're keeping him secluded in one of the studies. They let the rest of us smell stuff he's been sitting on and see him through the baby gate. Fritz has been pretty relentless trying to get in the room--there is, after all, full fat food in there and a litter box. So the people put up TWO baby gates and tied the door shut (there's no latch on it, so Fritz was just pushing it open). I don't know how long they'll keep him in there, but he looks like he might be fun, so I hope not too long.

Since a new kitty came home, I decided to call off the "dogs be good" routine. While the people were on the first round of walks this morning, I opened the closet door and took out all the coats. I left four of them in the hallway floor and brought the other four into the people's bedroom. There, I carefully extracted all cheese and treat residue from all the pockets. I had one of the coats in my crate, one on the bed and the other two on the floor. The people laughed when they came home, but cleaned it all up before they could get a picture. They think that will keep Hamish from getting any ideas.

So, anyway, we're off to herding lessons in a couple of hours. My people talked to the instructor yesterday and they decided to leave Rafe at her house for another week of herding camp. Par--tay.

Lesson for the day
There's nothing like a new kitty to raise the spirits in the house
p.s. My goofy little brother Hamish said to tell his fans that he's working on a video of him herding and will post it soon. I've graciously agreed to put in on my TV channel, but only if he agrees to cease and desist with any comments about my herding (and as a bonus, I promise not to tell how he freaked out like a little baby and practically hyperventilated when the people burned the pancakes this morning)
Posted by Pippin, the Gentle Pup at 11:14 AM 6 comments: 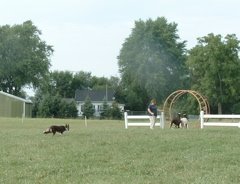 From the desk of Hamish Braeburn Moy, Esq. (in training)

My sister Pippin has been corresponding with all of you for some time. On occassion, I believe that she even mentions me, her handsome, perfect, younger (and did I mention handsome) brother. Today, she is allowing me to speak with my own voice. I am not certain what has transpired between her and the people, but the end result is that on this day you get to hear from me directly.

I also know from reading her correspondence with you that she has referred to me as "goofy." Rest assured, I have my legal team evaluating the degree of libel represented by this coupling of my name with such an adjective, but in the meantime, I also wanted to let you know, personally and from the heart, that I am anything but "goofy", as the image below most certainly attests.

In any case, the reason for today's letter is to let you know that despite what either Pippin or Rafe have to say, I am the undisputed sheep king. The instructor told me herself on Saturday (the rainy, muddy day) that I was the best. The fact that she said that Rafe was quickly catching up to me is immaterial.

I won't disrespect my elders by talking about Pippin's herding abilities. Our mother taught us that if you can't say something nice, you shouldn't say anything at all and that is a credo I try and live my life by. But, let the record show that I am the king of the sheep.

P.S. I understand that my sister Pippin is now a TV star. You can see her at Dogs with Blogs TV (if you look carefully, you can even see me in a spot or two)

(This message has been read, and after revision, approved by Pippin, the flyball dog)
Posted by H.B. Moy at 9:43 AM 7 comments: 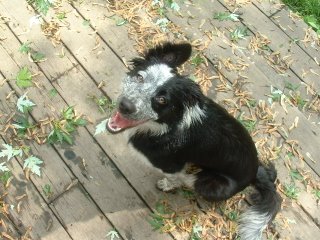 Thanks to everyone's words of sympathy for the loss of our kitty. We are still very sad at our house, but we are soldiering on. Me and the gang have been extra nice to the people and haven't stolen any illicit items from the counters, left mud prints on the bed or barked too much (well, except for Tansy and Hamish--but they can't help it sometimes, so we don't count them). I don't know how much longer we can be so good, but for the people, we're giving it our best shot.

Yesterday was herding day. Yesterday was also a weather trifecta--cold, windy AND rainy. Today it's still cold and windy but it's completely sunny--not a cloud in the sky. What a difference that one component makes. But, I digress.

We went out to the sheep. There we were all snugged up in our crates in the rolling living room (a.k.a. the mini-van) when one by one we were pulled from the warmth into the elements to chase around those cloven-hooved creatures. Who, it must be said, are not all that excited about a wolf in their midst. But, that's not our problem now is it? Anyway, the instructor had laid out 40 bushels of pine shavings in the round pen. The round pen is for the babies and beginners. Not for us--even though we saw our people looking longingly at the pine shaving filled round pen as they slogged through the muddy sludge. Even the horse tried to follow us from the muddy sludge pen to the slightly less muddy sludge pen, but the people were too fast for him and he didn't get to come.

But, actually, we don't so much care about the mud--it makes us feel like real sheep dogs rather than "suburban wanna-bes"--that's what our instructor's dogs taunt us with (you see, they are real working sheep dogs, and not very kind since it's not OUR fault that our people live in the city and won't buy us any sheep no matter how much we beg and promise to feed and walk them every day).

So, we worked. When Tansy was working, it hailed and hailed, but still she and her person worked. Hamish worked. I worked (even though I think work is for the little dogs--not for a gentle pup like myself). We got VERY muddy. Rafe wasn't there since he's still at herding camp, but he works every day and we're pretty sure, he must also be muddy.

My tail was like a rat tail rather than its usual fluffiness. I must have gained three pounds in clinging mud alone. Because mud in this part of Michigan is really clay--you know, the stuff they bake into bricks and then build houses with. Plus, my person was really on my case as we worked, which meant that I had to lay in the mud a lot (when we herd, the people's way to slow us down or stop us while they blow their nose or whatever, is to say "lay down"--if they're feeling especially chuffed with themselves, they try to sound like a Scottish person and say "lay dune". Lots of the people do this with their dogs--we've heard it at herding trials. We dogs try very hard not to laugh and call them wanna-bes--we know how much that can hurt).

Anyway, that much mud and muck meant one thing for us once we returned to our suburban gulag--a bath. Tansy, Hamish and I were rather unceremoniously heaved one-by-one into the people's water tank and bathed. They were especially long baths since we were so muddy (as you can see in the picture of Tansy below--I was at least ten times as muddy as her since she didn't have to lay down as much as me). 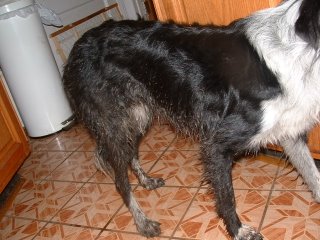 So, then we had to sleep a lot since the sheep and the rain and the mud and the bath had worn us all out completely.

Lesson for the day
Working sheep is great but be aware that if you do it in the rain, it'll probably be mean a bath
Posted by Pippin, the Gentle Pup at 11:37 AM 3 comments: