We have been a Quiet Flock of late. Well, quite Active at home, but not Going Out much or Barking On Line. I believe I have had less than 4 Walks since the last Moon! For good Reason have we not ventured far, as the Air and Ground are Very Cold. We do not wish to keep our feet on the Icy Snow, and find it difficult to walk without touching Ground. Here you see a Typical stance Outside: 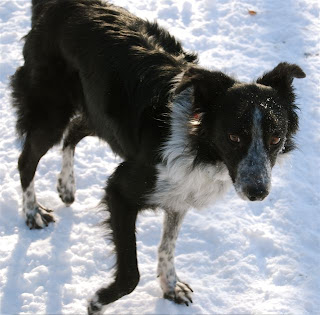 I believe the Air is getting Warmer so we will Walk more. Also, I will be learning New Tricks and practicing Old Tricks. Therefore I will be busy and have more of which to Speak! Others of my Flock will also Speak On Line.

40 Things About Us (Guest Blog)

Rafe here.
Pippin said she let her Scribe post. Something about everyone knowing everything about us already. Nonsense. Think I can come up with 40 things.

40 Things About Pippin's Flock
1.  Miss Pippin is very polite. Somedog wants a toy she has, she lets them have it. (Blog posts too.)
2. Miss Pippin will "bow" if a person blows at her face.
3. Kyzer is crazy-excited to go outside in the morning. (Guess we all are.)
4. I have a couple spots on my inner front leg. Otherwise I couldn't've joined the Flock.
5. Hamish has at least 6 shades of brown in his coat.
6. Tansy has more collars than any other dog in the Flock.
7. Renzo has titles. CGC, FDCh (or something), also "Sir Barks-a-Lot"
8. Kyzer's seriously good at Agility. World Team potential. (Some stockdog!)
9. Renzo loves lettuce spines.
10. Pippin jumped up and took a lady's contact lens out with a kiss.
11. When I was a pup back on the farm, I shared a fresh lamb leg with my brother.
12. Renzo sleeps in the Red Chair when the Scribes are gone.
13. I sleep in the Red Chair when the Scribes are here. Unless they shoo me off.
14. We got a squirrel in the back yard once. We're not telling who did it, but it wasn't Tansy even though she pranced around with it.
15. Kyzer doesn't like canned food.
16. Pippin doesn't like rabbit meat.
17. Renzo doesn't have front dew claws anymore. He kept ripping them when he was young. Still thinks they're there, though.
18. Fox hid in the basement ceiling for 8 hours as few suns ago, didn't tell the Scribes. We watched them walk around outside in 10 degree cold, shaking cat treats. Should've told them he was o.k.
19. I was recruited to be a cover dog for Naturally Wild dog food. They chose a prick-eared black-and-white border collie instead. Fine. Don't eat that food anyway.
20. Tansy's the last one to have her collar off at night.
21. She gets an extra goodnight cookie too.
22. And, she gets first walk in the morning.
23. Tansy's pretty special.
24. Pippin does not like being groomed. Couldn't get her CGC.
25. Hamish threw up on car rides when he was young. Bonine and maturity ended that.
26. Renzo was cornered in a laundry room by an orange cat.
27. Pippin leapt a couch to escape that cat.
28. I stayed clear of that cat when I visited those folks.
29. Renzo loans Pippin his dog park tag sometimes. Think that's illegal.
30. Kyzer doesn't like to go in the stock tank after working sheep. Even when it's hot.
31. Inçi lived in Germany.
32. Hamish and Pippin are immigrants.
33. Pippin rubs her face on the snow.
34. Tansy scoops up snow when she runs.
35. Inçi loves "Feline Greenies." I do too. Should be called "Canine Greenies."
36. Hamish has liked every dog he met. Except one Nova Scotia Duck Tolling Retriever named Sailor.
37. Pippin loves her Moni best.
38. We have dogs visit us a few weeks then leave. Just had a fun gal, Molly, part BC, part Australian Cattle Dog. More ACD the longer she was here. Heard she's doing well.
39. All of us border collies have different ear styles.
40. Some of us run off leash in a nearby park illegally. Don't tell.
Woof,
Rafe
Posted by Rafe at 4:55 PM 2 comments:

40 Things about my Person

Taz' person tagged my person in the "40 things about me" game. Since we pups, the normal authors of this blog, have played this game before, I've decided to hand over the typing keys to my person so that she can tell random, boring things about herself. For normal readers of the blog, just skip this post--I'm sure you aren't all that interested to know about her, but sometimes I find it's best to humor her a little.

Here's a recent picture of her--yes, she's that scary. 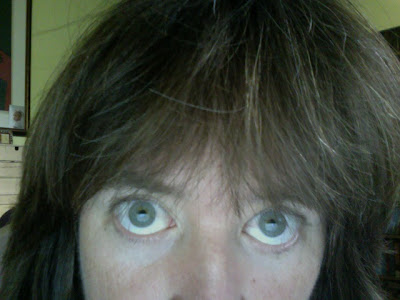 40 Things about my Person by My Person

1. When I was seven, I heard a preacher talk about the road to hell being a road with no other cars on it. Ever since then, I feel irrational panic whenever I am the only car on the road
2. I lived in Switzerland for a year and learned Swiss German
3. I was born in Bremerhaven, Germany (on an American Army base)
4. I worked as a maid for a summer in a hotel on the Mediterranean coast in central Turkey
5. I wrote my dissertation on Turkish-German bilingualism
6. I can’t spell. And I don’t really care all that much.
7. I was raised a Southern Baptist. I am not one now.
8. I met my significant other in a café in Germany on my 28th birthday
9. I have recovered from a serious illness
10. I was the valedictorian of my college class and had to give a speech. I almost threw up from nervousness
11. I sucked my thumb until I was a teenager
12. I worry about whether or not my students like me
13. When I was 16, I got drunk for the first time. On rum and Coke. I ended up throwing up out the window of a moving car and haven’t had rum since.
14. I haven’t been a smoker for 13 years.
15. I often wonder what paths my life would have taken if my father hadn’t died when he did
16. I have been a vegetarian who eats fish since 1995
17. I am not at all crafty, except that I love to knit
18. I bake most of our bread
19. I sometimes ache knowing that I’ll only see my niece and nephews a couple of times a year
20. Every other year, I make jam out of all the Michigan fruits as they come into season: strawberry, blueberry, apricot, plum, peach, raspberry. I don’t use pectin. I did once and it was a disaster--all the jam molded.
21. One of my ears has four piercings, but I rarely wear more than one earring in it
22. For most of the years I was a teenager, I plotted novels while shooting baskets in my backyard
23. I once owned a beautiful marimba that I played regularly (I was a percussionist in the high school band). The one decision in my life I truly regret was selling it.
24. My mother asked me if I was gay when I was 18. I said no. Ten years later when I said yes, she asked why I’d lied to her when I was 18. (See #7)
25. I am learning Anishnaabemowin (Ojibwe)
26. I like country music. A lot. But not so much the racist, misogynist bits.
27. For 8 mos. out of the year, I work between 70-80 hours a week.
28. I regularly complain about how much I have to work but I don’t think I’m qualified to do a different job
29. I’ve never been caught doing anything illegal. Except running a stop sign.
30. I have experimented with various illegal substances—but not in a long, long time
31. I haven’t carried any debt beyond my mortgage in over a decade
32. I follow David Allen’s “Getting Things Done” program and it has made life infinitely more manageable. Even though it’s pretty much common sense, it’s also taken me a long time to learn.
33. I love the snow but remain afraid of driving in it
34. Learning to do livestock work with a border collie has been the most intellectually challenging thing I’ve ever done
35. There is nothing I want more than a small farm where I can raise sheep, chickens and produce (including fruits to jam—see #20)
36. Lecturing to 100+ students twice a week takes most of my available energy
37. I drove from Germany to Turkey in a VW bug one summer
38. I’ve lived in Germany for six years, but not consecutively
39. I prefer doing dishes once a day rather than after each meal. My significant other is the opposite
40. I have a high tolerance for clutter
Posted by Pippin, the Gentle Pup at 10:19 AM 5 comments: