Tazimodo's person tagged me in a fun game. You go to your computer archives and then go to the 6th folder and pick the 6th picture and then post it along with the story behind it.

The 6th folder in my person's computer box is called "Renzo's Flyball Debut" from Sept. 2002 (At that point in time, I was in my momma's belly, but my people didn't know anything about me, hadn't even decided to get a border collie and so didn't know that I was on my way to them.) 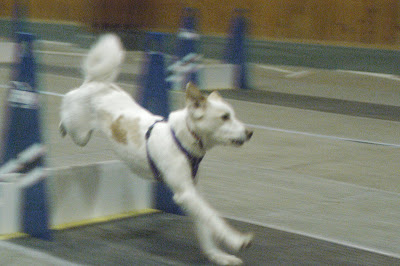 This was in Davisburg, MI and my people had been training Renzo for a long time in flyball (he had trouble ignoring the other dogs and also holding the ball). So, this was his very first run at a tournament. It was a practice run, but he did a very good job (though his form is not necessarily the best). Renzo is my people's first dog and flyball was the first thing they did with a dog.

Little did they know that the trailhead they had entered would lead them to five border collies in addition to Renzo and through flyball, agility and finally to sheep.

Now it's my turn to tag and I tag