I got NINE comments on my blog yesterday--that's more than in the whole previous two years combined. Being a dog and all, what that says to me is that I should quit every day (e.g. some behavior got a particular desired response). My person said I couldn't, though. Human rules really are far too illogical, but since I don't have the opposable thumbs, I'm somewhat at their mercy for some of my creative endeavors (others I am quite good at all by myself, like skillfully removing cat food from the kitchen counter. My people don't appreciate my creative talents nearly enough, however.)

Here's a picture of me with my gal pal, Tansy, just for those of you who love speckle faces (I'm in back) 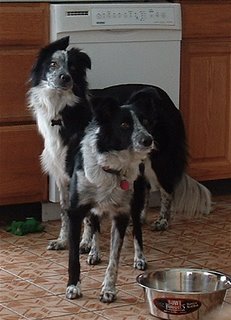 Anyway, I realize I've gotten a little far from my original flyball focus, so I wanted to explain my training exercise from yesterday. Like I posted previously, since I let the people know that I like to turn right, not left, I have to re-learn my turn. So, my person had me catching the ball off the wall. That means she threw it so it bounced once on the floor, hit the wall and the bounced off and I was supposed to catch it off the wall. That simulates it coming out of the box. She was laughing and having fun, so I did too. My catch off the real box improved some, so that was good.

My other activities yesterday included continuing work on Rafe's education about doggy manners. That boy has one thick skull. Here's a picture of him. My people really like him because he looks so a-typical. 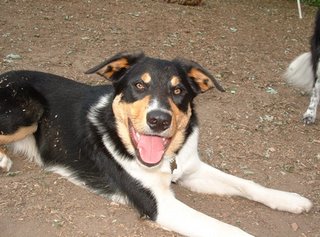 Even the people in the Border Collie rescue group where Tansy came from weren't sure he was a border collie. My people have some papers, though, with a lot of funny names like "Snip" and "Wisp", places like "Isle of Man" and "Ireland", and some marks that mean "International Champion" on them and they say that means he is BC through and through. They have papers like that for all four of us BCs in the family. Like I said, humans are kind of hard to figure sometimes. Does it really matter that much?

BC or not, he is one rude youngster. Just this morning, he laid down right in front of me and just stared. Then, when I showed him my ferocious teeth, he laid over on his side, still staring and actually touched my paw with his nose. Well, you can understand how appalled I was, I'm sure. Tansy was saying "move away, move away, move away" as only she can, but it took a low growl from me to finally get the big oaf to move back to his side of the room. Trying, trying times at my house. Thank goodness for flyball and sheep.

Today's lesson?
Don't try to understand people rules unless they affect you directly. They affect you if the human is holding a toy or food or making a clicky sound or calling your name or giving another dog attention
Posted by Pippin, the Gentle Pup at 10:32 AM 15 comments:

Big woofs to my new friends

Since I posted in despair about not having anyone to read my blog, I've gotten e-mails from some new friends.

Then, I heard from a very cute dachshund, Copper. He writes about his thoughts on things at JustMeCopper.

Then, just this morning, I heard from a labrador retriever named Opy, who is the original gruff puppy.

You can read about all kinds of dogs who keep blogs at the Dogs With Blogs site.

After all the heat of the last couple days, today is a rainy day. I've been working hard to teach our new friend, Rafe, to stop looking at me. He's kind of dense about it, though.

One of my people has a birthday today--Happy Birthday, Duck-mom.

Lesson for the day
Youngsters take a long time to learn not to stare, so a good snarl is always an important part of any dog's toolbox
Posted by Pippin, the Gentle Pup at 11:15 AM 10 comments:

It's been blistering hot in our fair neck of the woods and that usually means less activities for us. My silly little brother Hamish overheats very easily and my person is something of a wimp too. Neither of them seem to understand the "under a shady tree" principle for dealing with heat, silly creatures.

I have been working on my flyball box this week. Here's the dilemma: I was trained to turn to the left (the "fast" side) and I have an AWESOME box--tight turn, good spring, all four feet up. But, I forgot to tell them when they were training me that I prefer to turn to the right. They figured it out once they added in the ball, but the dilemma is that my box when I turn to the right is less than stellar--it's more like a stroll and I only go up with my front feet, which, besides being slow and meaning I drop the ball a lot, also means more pounding on my shoulders.

The solution, you ask? More training. My people aren't very smart about doing it either, but I'm reminding myself to be patient and maybe they'll figure it out one of these days. In the meantime, I've decided to revive last year's "lesson of the day" (more like "lesson of the post", but you get the idea).

Lesson for today
Upward pressure on a buckle collar is not really the same thing as a choke chain (yeah right)
Posted by Pippin, the Gentle Pup at 5:54 PM 2 comments:

Well, in addition to the two comments I got from Ninja and JustMeCopper (thanks loads guys), some others have persuaded me that my words are not just disappearing into the cyber-nether.

I went to a training seminar this week-end. Boy did I have some things to learn. Me and my person learned it'd probably be good to go back and do some basics like "watch" and "sit". Kind of embarrassing for her, but it's all tricks to me.

Here's a picture of all the dogs that live at my house. Can you find me? There are four of us Border Collies (and we all look a little different) and my buddy, Renzo. There are also still those three cats, but we don't like to talk about them. Especially not the mean old one. 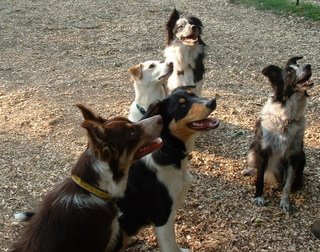