Shout out to Rafe, Novice Champ

From the desk of H.B. Moy, Sheep King Extraordinaire 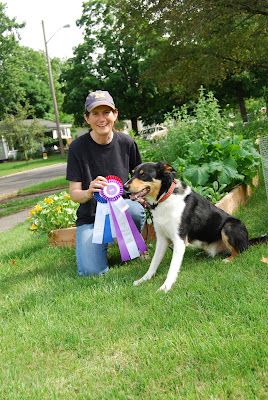 Since my last missive about a month ago, much has happened at our humble house. I think my sister Pippin plans to talk about some of the things that have happened (since some of them involve her), but I wanted to show how humble and gracious I am by giving a shout out to my packmate, Rafe. In general, I don't see much to like about this country bumpkin who my people brought into our pack against my better judgment. He is quite a goof-ball and can just really get up under your skin, if you're a thinking, careful, well-mannered dog like myself.

But, I have to give credit where credit is due.

Mr. Rafe won the Windswept Farm Novice trial last week-end. He came in second place in the first round and first place in the second (as a small side note, I came in sixth in the first round, second in the second and third overall) and had the overall high score. This is especially great for him because he's been working through some "issues" according to my people (we don't tell them this, but our "issues" are usually called "our people.").

Kyzer was there, too, and did his best job yet.

I don't have much else to report on, but here's a "trial report" my person wrote:

The trial was at Jeanne Weaver's Windswept Farm, which is about an hour northwest of us. This was Kyzer's first time on this field, but both Rafe and Hamish have been to a trial here before and both of them have also done a few clinics/lessons here. This was a pretty new set-up for novice, though--running east-west instead of north-south, which has been the case in prior years. There are draws on both sides, but an especially strong one to the south (away to me side), where the sheep normally hang out and where the set-out was. Also a pretty strong draw behind the post because that's where the exhaust was (as a side note, at Hamish's very first trial two years ago, which was at this same trial, he ran into the exhaust after his run and pushed all the sheep out!!).

The sheep are Katahdins from two different flocks. Our sheep were ostensibly the sheep Jeanne uses for lessons, but they were nonetheless very light--totally clocked the dog for overflanking or coming in close.

There were 16 dogs in the class--mostly familiar local folks, but a few newbies.

Rafe went first and started on a very nice outrun, but the sheep got away from the set-out before he was even halfway up, so the judge (Dal Kratzer), told Susan to call him back and gave her a re-run. That meant little Kyzer was the first dog up. Yee-haw. I sent him right because I figured that if he stopped short on that side, the sheep would squirt off toward the less strong draw. But, the trick there was a large tree right in the path. Kyzer had a coat-hanger outrun--started almost straight up the field, but once he cleared the tree, he kicked out nicely and came in pretty deep. He ended up overflanking some, but he got them back on line and charged them down the field. He was pretty good, but he didn't keep them tightly together and one kept trying to sneak off. He covered, but it wasn't beautiful (though he did get a 19-8-18 OLF). He pushed pretty hard around the post and the one that had been trying to get away split. I got them back together, but she took off again and was bee-lining it for the woods. I tried again to put them back together, but Kyzer either didn't see the one that had split or was feeling weird, so I decided to just work the two left--dumb, beginner mistake, but lucky for me, we timed out, so he still got his points (46).

When Rafe's turn came, Susan had to shoosh him twice as he started to lock up but then he got going and was very deep--beautiful lift, truly high caliber. He brought the sheep straight down the field, pulling himself up when necessary without a command from Susan. No troubles at the post or the wear-cones and Susan did a very stylish backwards run to the pen and the sheep walked right in as if that'd been their intent all along.

Hamish was next up and I decided to send him right on a similar theory to the one I used with Ky (this was probably the first time I really tried to strategize which way to send), but it was a mistake because he was too sensitive to the pressure of the barn/set-out and came in really tight, so I had to lie him down and re-direct him. He took the re-direct, but still came in pretty tight. Then, he was off-line for most of the fetch--I tried to get him back on line, but it's such a short distance. No troubles around the post or the wear-cone (I actually "drove" both rather than wearing) and a perfect pen. I got lots of compliments on the run, but the score wasn't great (63/80) because of the messy OLF.

Sid, the "most promising young dog" at the Bluegrass, won that round, Rafe came in second and Hamish came in 6th.

Hamish was up first of our guys and I decided to send left so that he wasn't running into the pressure. Excellent choice; beautiful outrun, reasonable lift, but again, off-line fetch. But, he held good pace and kept the sheep quiet. No troubles around the post or the wear-cone. I didn't get him lied down quick enough to get to the pen before the sheep, so I had to work him from the back of the pen--which he did. I was careful to let them drift out far enough that he could turn their heads to get back into the pen, which he did and in they walked and he got a 69 (second place). Combined score of 132

Rafe came next and this time, he had an even nicer outrun--no encouragement from Susan, beautiful, wide, came in deep, lifted like a pro. Again, the fetch was bang on-line; post was great. Susan overflanked him a bit on the wear, but the sheep didn't cross the plane, so she was able to send him back around and get the wear. They had to work a little more on the pen but were able to get it easily. I don't remember his score for this run (but he had a 20-10-20 OLF), but he got first place and his combined score was 140 (which was 1-point higher than Syd, the dog who already runs nursery) for the high score in the class.

Kyzer was the last of our crew and again did the patented coat-hanger outrun to the rumble of thunder and rain. He was a bit tighter at the top, so the lift wasn't as good and he brought the sheep barreling down the field--he did pull up once when I gave him a "time", but he had jets on. And so did the sheep. It got kind of messy around the post-the ended up circling the wrong way and then booking toward the exhaust. This is the kind of situation that has gotten me in trouble many times with Hamish, but I decided to trust Kyzer and sent him. He covered great and go them back coming toward me. The rest of the wear is a little fuzzy in my memory--maybe because it was going light-speed but at some point my stick got stuck in the ground just as I needed to head to the pen, so I left it there and ran to the pen, sheep hot on my tail. I flung open the gate and got Kyzer to lie down in just the right spot and lo and behold, those ovines turned their heads and went right in. Again, a 46 score, for a combined total of 92--right in the middle of the group.
Posted by H.B. Moy at 3:12 PM 3 comments: