Maybe I went too far

I’m sorry that it’s been so long since I last posted. I’ve been working pretty hard at my operations; however, a recent incident has made it much more dangerous of late. Indeed because of a minor miscalculation on my part, I have been not been able to conduct many missions. This is, to say the least, a bit of a crimp in my style

In my most recent operation, I think I might have gone too far. Like most operations, this one started out well but then I let things get a little out of hand. Once they were out of hand, though, there was nothing I could do to stop it.

Let me back up a little and start from the beginning. 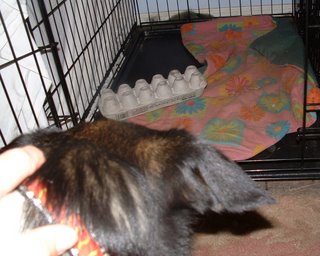 Mission one: The egg carton

As most of you know, in addition to training my little brother Hamish in covert missions, I’ve also been training Rafe for some the easier operations -- things that are really not much challenge for me anymore but that still need to be done. The egg carton mission was one such operation. The people had left an empty cardboard egg carton in a relatively accessible place, requiring a minimum of counter effort. So, I called Rafe to me and asked him to watch. I demonstrated the careful counter technique, involving a solid stand on the hind leg and a hook (it helps if you have a claw like Meeshka) with a front leg. Once you’ve snared the object and have not been discovered by the people, you can take the object to one of your lairs and do with it what you will. I took the carton to my crate; however, as I was showing Rafe how to dissect something like an egg carton, one of the people (the nosier one) happened upon us. I ran away quickly, though I knew that the telltale evidence lay in my crate. Rafe acquitted himself rather well, acting as if he had no idea what had happened. There he is, looking at the egg carton as if he'd never seen it before and certainly wouldn't touch it himself. 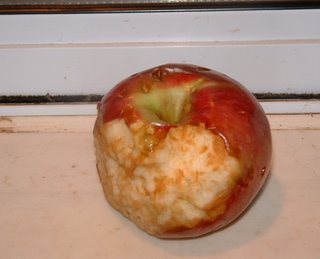 When the toddler and her mommy were visiting us, the people all went “apple picking” and came home with two big bags of apples which they left, astonishingly enough, in the middle of the living room for several days. Apples are normally the purview of my buddy Renzo, so I left them alone for almost three days. Inexplicably, Renzo wasn’t interested in the apples. (He is having his own battles with the people who have started using a water gun on him when he does things they don’t like, so he may have been trying to convince them that he’s turned over a new leaf.) In any case, since they were right there for several days, I thought they presented a good covert mission. So, I called Hamish and told him to watch me. I delicately took an apple from the bag and then whisked it away to the people’s bed, where I took a few tiny bites. Then I called him to the bed to have a turn. But, suddenly I noticed that the people were coming to the bedroom. I quickly jumped off the bed and ran away. Hamish stayed on the bed; but his excellent training allowed him to look very innocent. The people called him off the bed without ever seeing the apple. Once they found it (several minutes later), they couldn’t be sure if Hamish had been the one to steal it since they hadn’t seen him actually eating it. AND, they suspected me in any event with a mission like this one—however, they hadn’t seen me anywhere near the apple. So, the second mission was also a success. 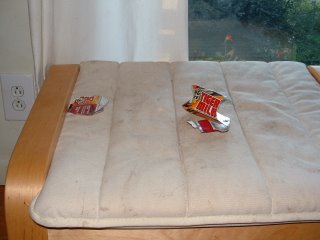 One of the skills I’ve been working on for the last couple of weeks has been opening the closet doors. My people have sliding doors on all the closets and I discovered, by accident really (though I’m not sure there are any real accidents as I’m a firm believer in fate), that I could open the doors using a combination of nose and paw pushing. I’d been perfecting my abilities for several days but the people kept hearing me at work and calling me off. Which helped me to realize that if I was going to get at the items in the closet (like the coats that have the pockets that hold the treats), I’d have to wait until the people weren’t around. This kind of mission can always be dangerous because it can lead to the people deciding that you can’t be trusted alone in the house and so I try to reserve attempting such missions for seriously promising loot. Well, it happened. The people were doing the morning walks (mine turn was over) and I made my move. For which I was heavily rewarded with an entire candy bar, called a “Tiger Milk” bar. It’s called a protein bar on the wrapper, but it was pretty much like any other candy bar I’d ever seen—though it was the first I actually got a chance to taste. It was good. I extracted it from one of the coat pockets and quickly (though delicately) removed it from the wrapper and ate it up. The people kind of laughed and said, “Well, at least it’s carob-coated rather than chocolate.” I don’t know what that’s supposed to mean, but I know the people are really maniacal about not letting us have chocolate ever since Renzo took on the mission of eating a bag of Hershey’s kisses (that were hidden in a cabinet) and ended up at the vet’s for two days. From this mission I learned two things: 1) There are no limits to my access to things behind closed doors or in other difficult to reach places and 2) The people didn’t crate me for my new-found skill. Unfortunately, these two lessons have led to my downfall because I got overconfident. 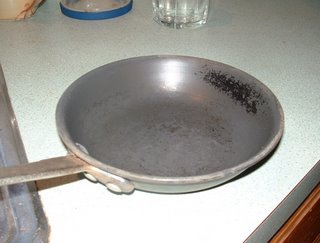 The last mission I’ve had was the one that seems to have ended it all for me—at least for the time being. The people had left a frying pan on the stove-top without washing it and then left for work. They actually do this every day and so it wasn’t that unusual. I’d been eyeing this pan for some time, trying to figure out how to get it and with my confidence at an all-time high, I decided to just give it a try. Pulling it to the edge of the stove was not nearly as difficult as I had imagined and it was in my grasp within seconds. As I was licking off the lovely food particles (vegetarian sausage and sausage-flavored oil residue), my front paw slipped on the burner knob and it turned on. I looked at it quizzically as it started to get hotter and hotter. I knew this was bad, but I didn’t know what to do—stoves being a new type of “counter” for me, I didn’t really understand how they work. So, I decided the best course of action would be to take a nap and maybe it would all go away. The next thing I knew, my person had walked in the door with a quizzical look on her face. She noticed the smoke and strange smell right away and hurried to the kitchen. There, she found the frying pan on the red-hot burner. The pan was smoking and had turned an eerie shade of white (as you can see in the picture). I could tell she was really upset and so I tried to give her kisses, but she was too busy piecing together what had happened.

Ever since then, the people have been crating me when they aren’t home. I’m not sure what I’m going to do and may have to deploy the youngsters, Hamish and Rafe, well before they are ready.

Friends in the dog blog world, do you have any advice?
Posted by Pippin, the Gentle Pup at 6:12 PM

Boomer and his mom Carol said...

Well Pippin, I'm thinking you might have gone too far. I know you didn't know about the stove thingy, but I guess humans get weird over stuff like that.

I would give up the counter capers for a while and lay low. Once your humans forget all about it then you can counter surf again.

Obviously that stove was stupid for turning itself on!

My Human always puts me in my box when she leaves. I don't destroy things like the others have, but she's said that she needs to give that stupid Lex a break. Ha!

Stormy said your bipeds should punish the stove for turning itself on - ditch it and get one with knobs in the back. Stormy's really smart. Zim said you are ONLY trying to teach the bipeds to police up the house before they leave (he was named after a Drill SGT and likes everything ship-shape). Ammy said they should be happy you're OK because the stove could have done a real number on you guys AND the house! And me ... I had a bit of a problem counter-surfing, too. I even got whole bananas off the top of the magic cold box! Now mom hides everything in the food safe (the appliance formerly known as the microwave) or in the magic cold box itself. I wish I knew how to open doors like you!
Luv,
Dave

I agree with Boomer and think you may have overdone it and need to lay low for a while. Watch out for stoves though. I expect your people may think about it and may take the knobs off the stove unless they are cooking. That would make the stove less scary.

True story. My Mom told me a story about Holly once. (Holly was my older sister - she was 15 and isn't around anymore) Once when she was a puppy, the story goes, the family was visiting the grandparents at Christmas. Somebody left a whole new box of Whitman Sampler chocolates on the coffee table not thinking and went off and left Holly alone with the chocolates. Holly ate almost the whole box and survived to tell about it, but not without a lot of throwing up. That's why I can't have chocolate!

I admire the closet opening though! Great work.

I'm of the lay low opinion. If you pretend to be real good, your parents will probably forget what you did. It's that trust thing.