From the desk of Hamish Braeburn Moy, Esq.

After being inspired by the Aof4's puppy picture-a-thon and some newly found photos of Copper, my sister Pippin decided that we should do the same thing and for some inexplicable reason, she picked me to be first (probably because I was the cutest puppy on the planet). So, here I am as a little tyke.

This was the first picture the breeder sent to my people of me even before they thought they might get me. So, this is before I was Hamish. 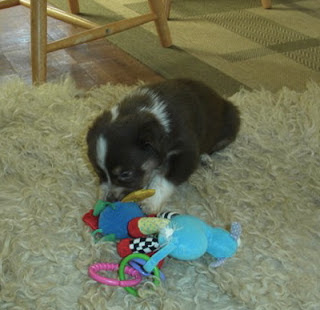 Here's a picture of me after I became Hamish. Still pretty guinea pig-like, huh? 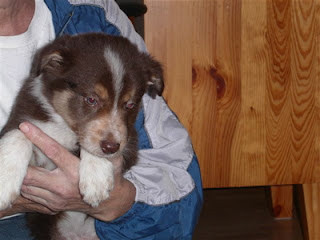 Here I am on my first day in Michigan. I had a hard travel from Canada because I got car sick. Let me tell you, it's no fun being car sick for 8 hours. But, I survived o.k. Look at what my ears are doing. 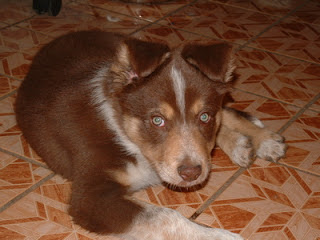 My big sister Pippin (she and I have the same mom) was really nice to me right from the start. That's unusual for her, so I decided I must be a very important dog. She still likes to play with me the best. 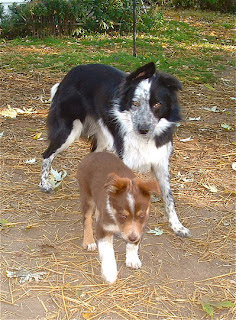 Although I look sweet and innocent in this picture, what it really captures is my very own first dug hole. Wouldn't Meeshka be proud? And, hey, check out my ears here! 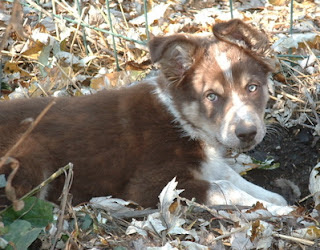 My people thought I was so smart that I should go to school right away, so off I went. Here I am with my diploma (and some really wacky ears) 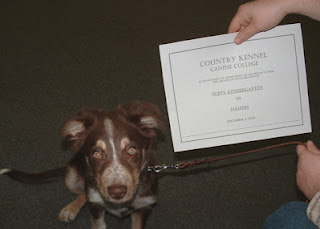 Finally, the big day came for me when I first got to see some sheep. I was just a whipper-snapper--only four months old--but on my second visit into the pen, I ran up to the sheep and told them they had to listen to me. And guess what, they believed me! My people were so stunned they forgot to take a picture, but here I am waiting while Tansy had a turn--and still with those who-knows-what-they're-gonna-do-ears 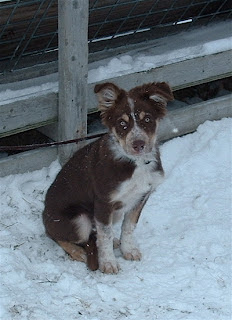 It didn't take long before I was doing more or less "real" (but still beginner) sheep work. Here I am at 8 mos sending the sheep through a chute. That's me in the back. 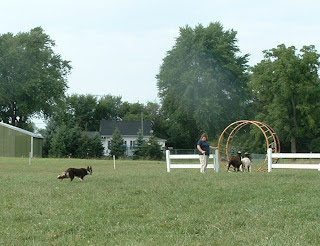 And finally, about this time, my ears made up their mind and here's the final product. I'm the only one in my pack whose ears both stand up pretty much all the time and all the way. 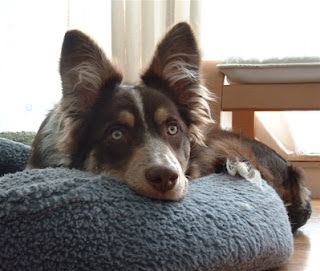 Watch for the early pics of the rest of my gang in the coming days. One of my people thinks it's really neat to see all the different ear types, so don't be surprised if the ears of my packmates get pointed out too. Of course, you should feel free to tell her she's a big geek.

Oh, HAMISH! For as handsome as you are now, I shouldn't have been so bowled over at how cute you were as a wee puppy - but oh MY! Those pictures are just too MUCH! I love your ears and how you told the sheep you were their boss right away and that SWEET picture of you with Pippin (it reminds me of me and Stormy, if you don't mind the comparison!). And guess what!?!? On our car trip from my birth farm to home, I horkaed on my mom! It was a much shorter trip than yours - only about 1 1/2 hours - but I'd never been in a car and I was so afraid! Mom said great sister Lucky horkaed on her when they brought her home, too, and they had a long and happy friendship, so she took it as a good sign. :)
THANK ROO for sharing your pictures!!! I love ALL of them! You are so handsome, Hamish!!!
Love,
Amber

Adorable! Where in Canada were you born?

I loved looking at your puppy photos Hamish. Your ears were very amusing, but look great now.

Wow, you are so cute! And talented! And crazy ears!

(Bow)wow you're such a cutie, Hamish.

And yeah, I understand about the ears. Mine do all sorts of funny things too (still) but they don't stand up all the time as attractively as yours do.

Hey He-man, nice puppy pics. My Mom is always telling me I was a cute puppy, but somehow all the puppy pictures disappeared when the ex left. But as you can tell from my pics I don't have two prick ears...just one. Shelties are supposed to have ears that sort of flop over a little bit, so I guess I won't be doing any conformation...he he.

Cute pictures and I enjoyed the story too.

Ashputtle said...
This comment has been removed by the author.
10:58 PM