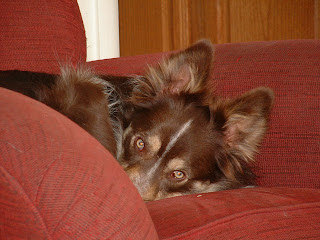 Sounds like fun! I have no idea what I would do with sheep. Probably just look at them. I don't have any of those special herding skills. In fact, although I am über-famous, I think I'd be rather useless at it. And a special note to Pippin, my fellow Canuck, what about 1401?

Hey Pippin, I saw your comment on Copper's blog. When I signed up for the Bone Zone, I never received an email confirmation, but I was able to sign into the Bone Zone even without the confirmation! Just thought I'd let you know in case you don't get that confirmation.

You lot are all so super clever. I am in awe of all the stuff you know how to do.

Hamish! First of all, you look 100% adorable in your sleepy pose! (sigh) You're VERY handsome! And the herding! That looks so fun! I'll bet you were the BESTEST herder there! Did your human take pictures of you or were you too fast to photograph? Wouldn't it be fun for you and me to run and run and run together!?!?
Love,
Amber